Aim and Background: Epilepsy is an important chronic neurological disease in the pediatric population and the main goal of treatment is to prevent recurrent seizures. Cognitive, neurological and behavioral status of the patient and the side effects of antiepileptic drug (AED) are monitored in follow-up visits. In this study, we investigated the clinical characteristics and the factors affecting prognosis in children with epilepsy and receiving antiepileptic drug therapy, their treatment compliance and outpatient follow-up.

Method: Records of patients who applied to the pediatric outpatient clinic and followed for 6 to 24 months for epilepsy were analyzed retrospectively over a period of 46 months. Patients who were regularly followed up for 24 months and adherent to AED were described as the compliant group. Sociodemographic factors and clinical data were evaluated by descriptive statistics and Chi-Square, Kruskal Wallis and Mann Whitney-U tests.

Results: A total of 87 patients who were included to the study, consisted of 36 girls(41.4%) and 51 boys(58.6%) and had a mean age of 67.7±38.6 months. The first seizure frequently occurred between 0-24 months of age (44.7%). Generalized syndromes were more frequent (59.8%). The 43.8 percent of patients applied to outpatient clinic in twenty-four hours after the first seizure. As the age of the onset of the first seizure increases, the period between onset of seizures and admittance to the outpatient clinic decreased(p<0.05; r = -0.33). All patients continued to attend the follow-up visits and were compliant with AEDs in the first 6 months in which relapses decreased. Patients who were adherent to the outpatient follow-up and antiepileptic drug therapy for 24 months were 45(52%) and their seizure frequency decreased (p<0.0001) and less abnormal EEGs were present. In our patient group, family history, history of febrile convulsion, type of epilepsy syndrome, age of onset, time to start treatment after the first seizure, type of AED did not affect the prognosis of epilepsy.

Discussion and Conclusion: In patients compliant to regular follow-up, relapses decreased and remission periods increased and EEGs which were previously pathological improved to a great extent in 24 months. Routine follow-up and compliance with treatment are important for successful management of epilepsy. Due to the inadequate awareness of families there are delays in referrals to outpatient clinics and nonadherence with follow-up care. For better prognosis children with epilepsy, a holistic approach is needed to be adopted in which primary care physicians participate. 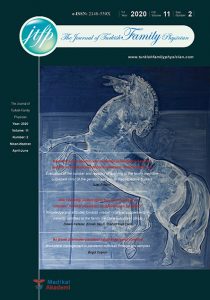 Your Opinions are Important to Us!