Objectives: MPV and PDW are vascular complications markers and improved glycemic control levels are correlated those indicators in patients with type 2 Diabetes Mellitus. The aim of in this study, MPV and PDW levels were compared type 2 diabetic patients treated with oral antihyperglycemic agent and insulin.

Methods: This study was performed retrospectively on type 2 DM patients who were admitted to Ankara Atatürk Training and Research Hospital. 118 randomly selected patients were divided into 3 groups that were non-diabetic (Group 1), who received OAD therapy (Group 2), and those who received insulin therapy (Group 3). HbA1c, MPV, PDW levels were collected, analyzed and compared with each other.

Conclusions: In our study, no significant difference was found between MPV and PDW values of patients using insulin and oad. Early initiation of conventional insulin therapy in patients with type 2 diabetes provides good glycemic control. Rational drug use in accordance with the guidelines; gains importance in treatment success. Skipping this factor may reduce the efficiency of other efforts in relation to rational treatment. 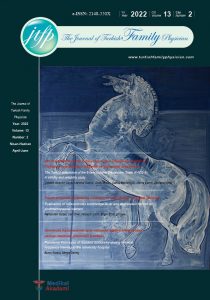 We recommend that you look at the checklist to review your article for The Journal of Turkish Family Physician.